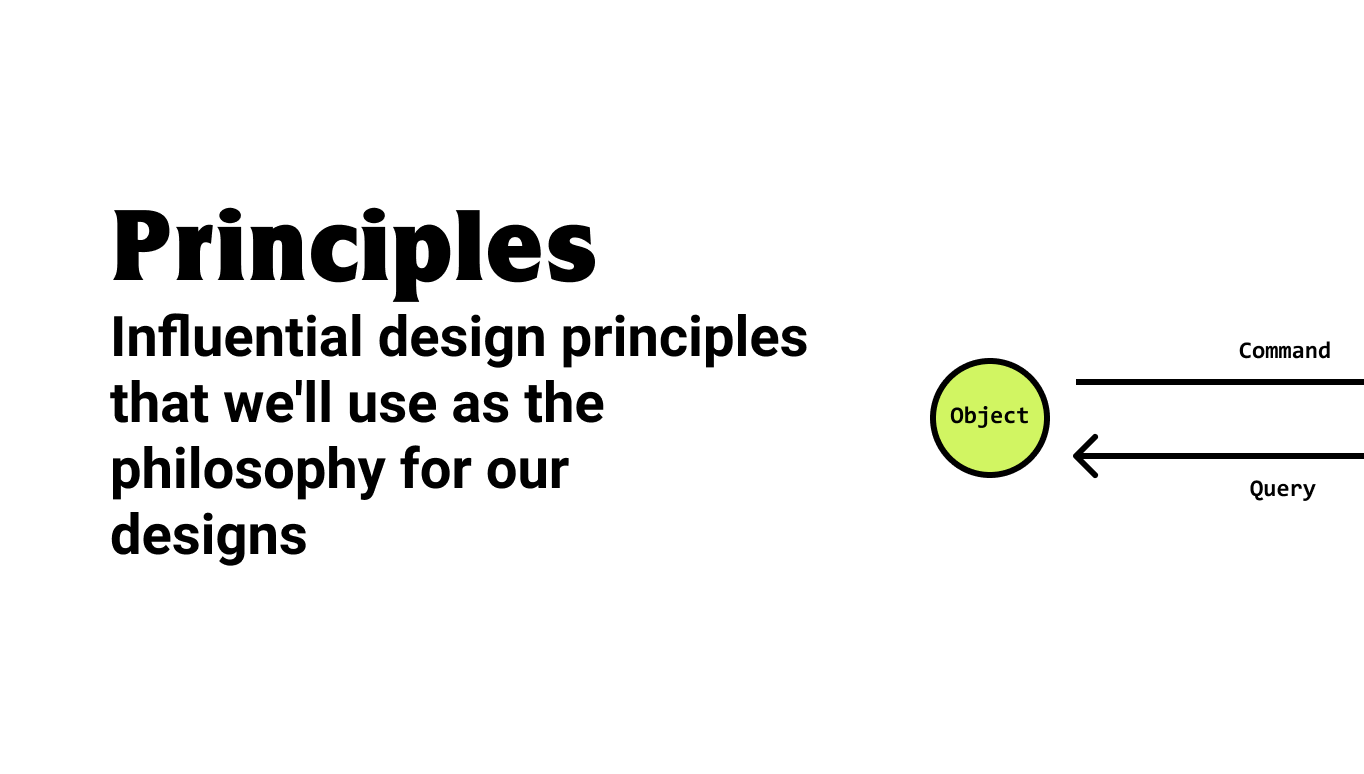 This is page two of a guide on Client-Side Architecture basics. Start at page one.

While the clean architecture works, we don't need a copy of it on the client-side. However, I do think it's a good idea to look at the same design principles and practices that formed it and apply those to the client.

You'll notice that each principle, in some way, is about enforcing some structural constraints as to what can be done, and how things are organized.

In my opinion, these are the most crucial design principles. They influence 90% of what constitutes good client-side architecture.

Separate methods that change state from those that don't

Command Query Separation is a design principle that states that an operation is either a command or a query.

Operations are the same thing as interactions.

The primary benefit of this pattern is that it makes code easier to reason about. Ultimately, it urges us to carve out two code paths: one for reads, and one for writes.

The simplest way to see it in action is at the method-level.

Consider the methods createUser and selectTodo. These are both command-like operations.

Notice that neither of these methods return anything. They're both void. That's what a valid command is.

That means that the following methods aren't valid commands.

Queries are operations that return data and perform no side-effects. Like these, for example:

Why does it matter?

When a user clicks delete on the todo, what happens next?

Well, the view passes off the event to a container. That could connect the user event to a method from a React Hook or a Redux thunk. From there, we might want to run some logic, decide if we should invoke a network request, update the state stored locally, then somehow notify the UI that it should update.

That's a lot. And that's a simple app. And when I said we might want to run some logic a moment ago, I wasn't clear about exactly what kinds of logic it could be. It could be authorization logic, validation logic, interaction/domain logic, etc. Instead of putting five different kinds of logic wherever, we can classify it, carve out a place for it to live, and be more structured and conscious about how we connect features together.

Separation of concerns is one of my favorite design principles. It's about thinking the jobs to be done, delegating them to a particular layer that handles those concerns, and then ensuring those layers do their jobs, and their jobs only. 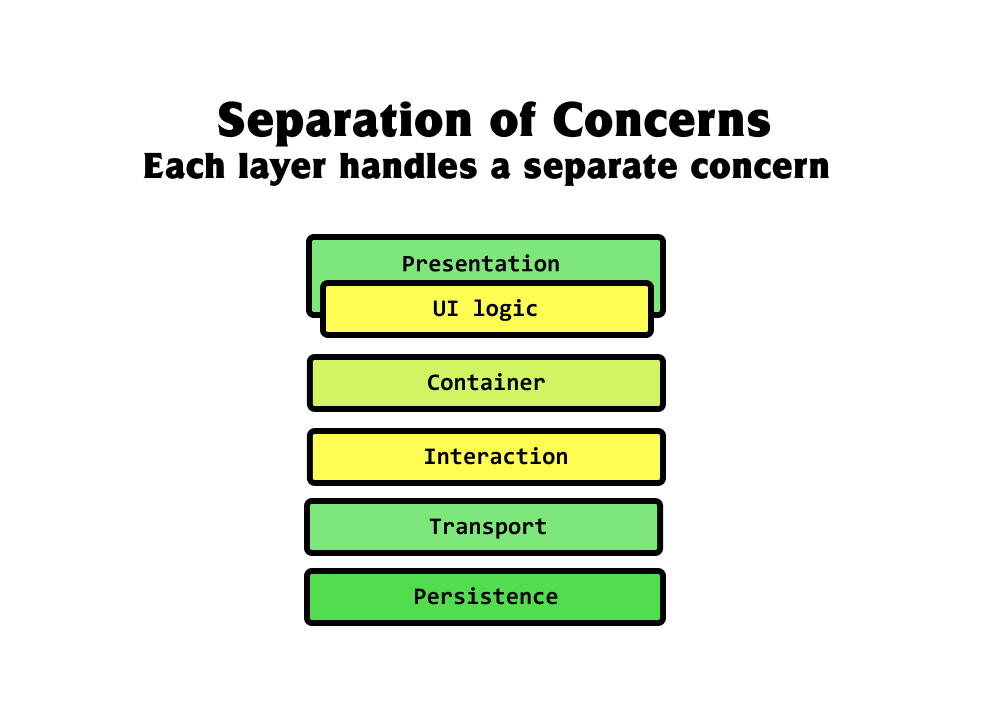 How separation of concerns and CQS work together

This means that every feature cuts through several concerns to work.

I like to think of features as vertical slices that cut through the stack.

When we add or change features in an application, we're modifying a part of the vertical slice for that feature. 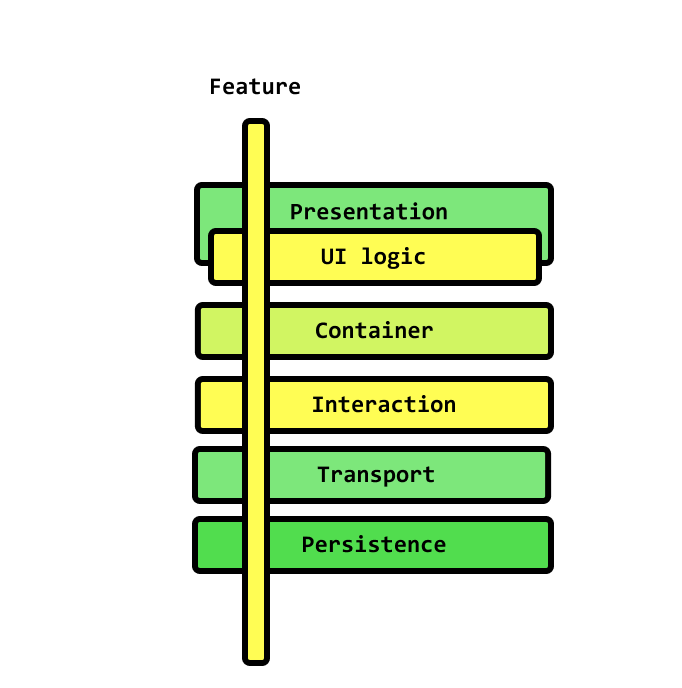 Need to change what happens a when todo open for longer than 30 days was just completed? Want to throw confetti on the screen and say how proud of the user you are? Gotcha. Add some logic to the xState model from the interaction layer for the Complete Todo feature. 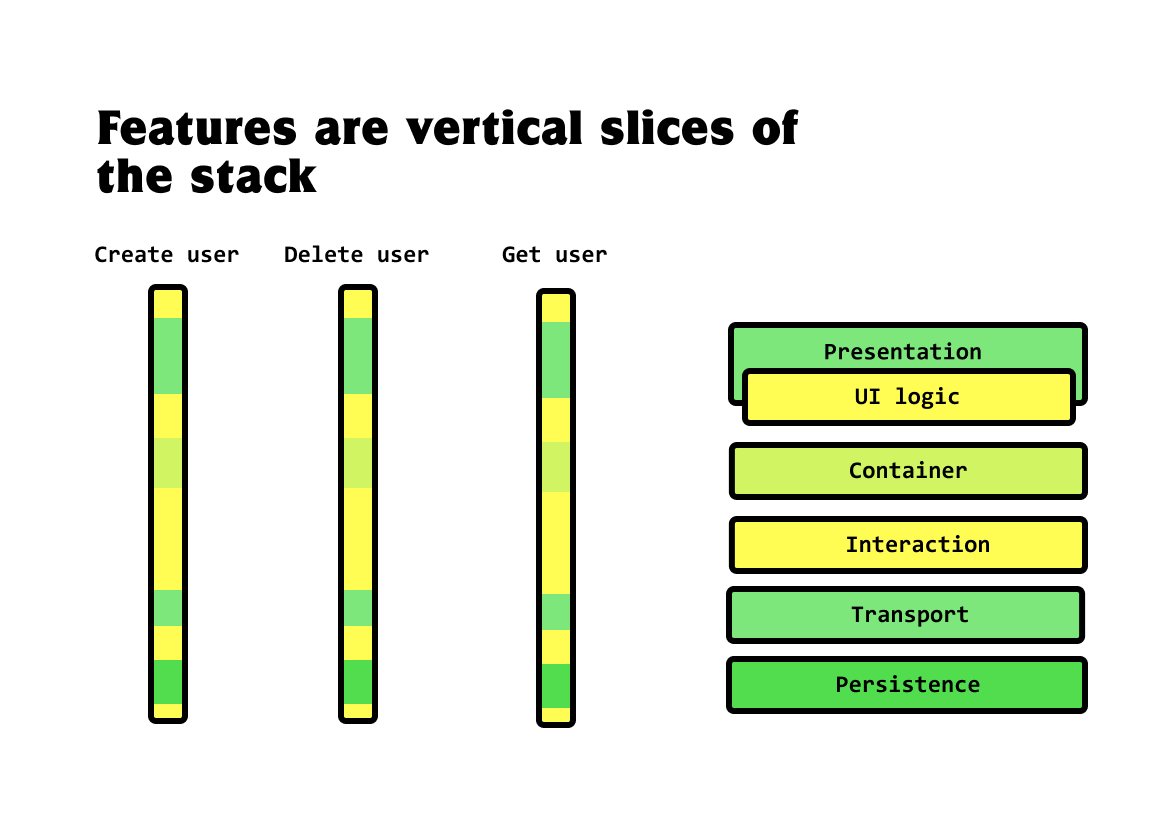 Understanding the responsibilities of each layer enables us to better reason about which tools to use per feature.

I first heard of the term vertical slices from Jimmy Bogard. Thinking of features this way reduces the amount of time it takes for developers to figure out where to add or change code.

This is where developers get stuck, figuring out what the layers of the stack are, and which tools can be used at each layer of the stack.

Vertical slices enables us to keep Single Responsibility high if we "minimize coupling between slices, and maximize coupling in a slice" — via Jimmy Bogard. Also read Kent C. Dodd's article on "Co-location".

Why does it matter?

Understanding the layers/concerns and their responsibilities in a client-side application.

First of all, thanks for the quality of these articles!

So do you group your files by said "Feature", with a specific folder for each "feature" and in those do you repeat the structure you're proposing here https://github.com/apollographql/ac3-state-management-examples/tree/master/apollo-remote-state-advanced-cache-apis/client/src ? 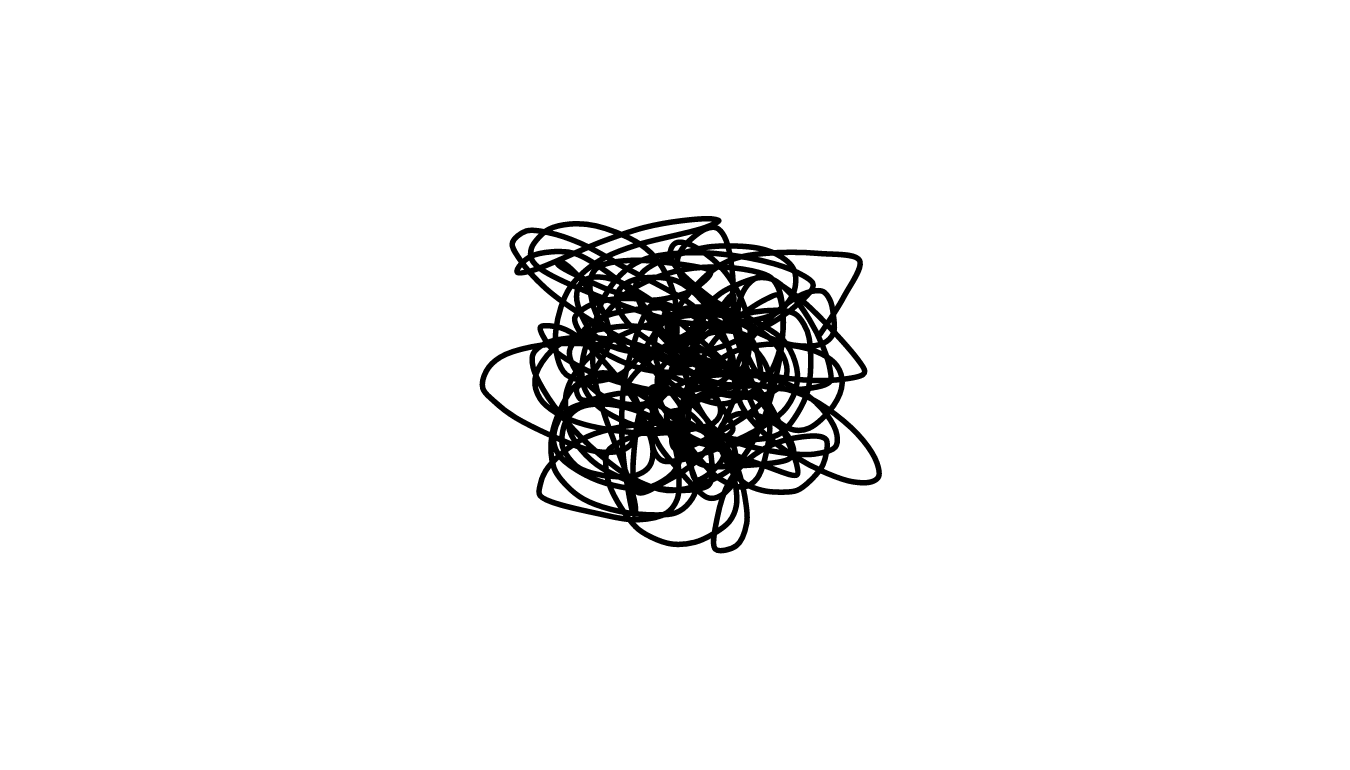 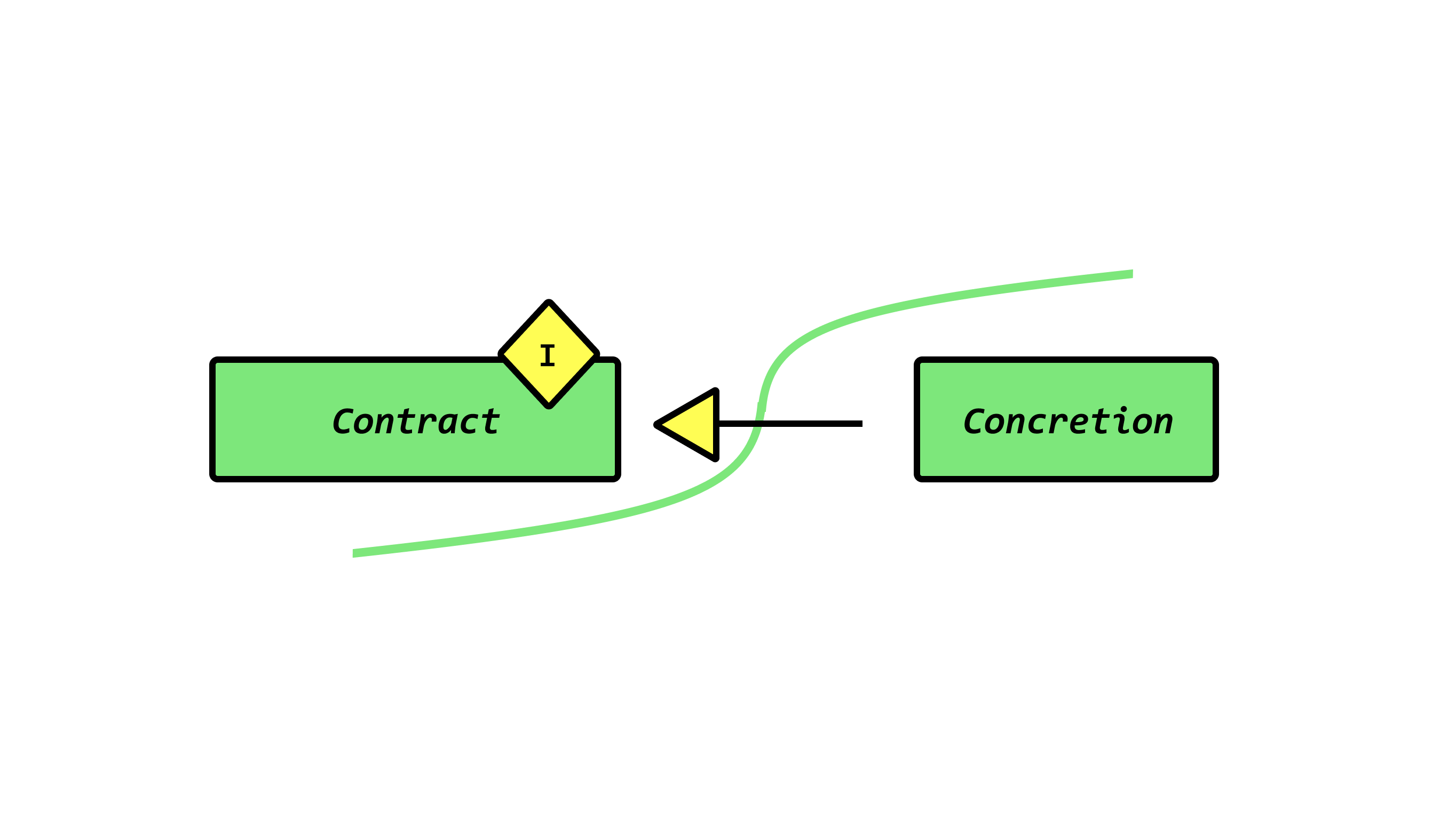